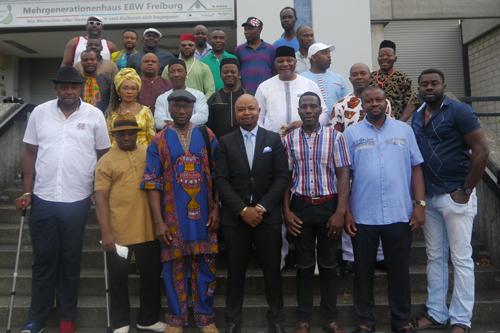 It is said in Igboland that a Kite does not get ensnared in a far-flung place. This old Igbo adage plays a vital role in the life of every son-of-the-soil living outside his home town. Ndigbo at all times still practice the Jewish tradition as depicted in the old Testament of burying their dead among their ancestors.

Owing partially to this old tradition, the Igbo Community Union Southwest Germany e.V was formed in 2001 when a beloved brother, George Onwu lost his life in Freiburg. The sad incident necessitated an emergency meeting of most of Igbo people living in Freiburg and its environ in the house of our eder, Mr Bob Onyemata.
At the gathering, Umuigbo raised the fund (largely through donations) desperately needed to bring the remains of the deceased back to his town, Ufuma in Anambra State, Nigeria.
That gesture all but tresses the fact that Ndigbo in general do not take the issue of death lightly. Mere thought of death makes us uncomfortable because no one knows who is going to be the next victim.

The response and reaction to that sad call was so overwhelming that it's there and then decided to form a full-fledged union capable of handling such inevitable eventuality in the future.
That particular day has been a remarkable one in our lives because that fire of brother-hood ignited on that fateful day has been unquenchably kept burning in us irrespective of the circumstance.

The union of brotherhood is then formed to guarantee that no one abandons his brother in any adverse moments. That is to say---an Igbo man must at all times be his brother's keeper — and this is again what we mean when we say... 'Onye aghala Nwanne ya’